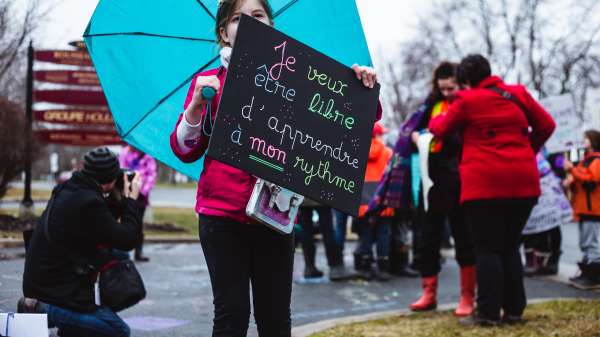 Before the fall of 2017, the legal framework governing homeschooling was unclear. Changes to the Quebec Education Act set new guidelines, already suggesting that there would be both more recognition of the right to educational freedom but also increased control on the part of the government.

Conflicts between homeschooling families and many school boards are all too familiar, and these situations have led parents to distrust any form of control that could conceal an intention to limit their educational freedom. Most parents hoped above all for more fairness in the treatment they received.

“The most important : the recognition of the differences between public education and homeschooling.”

The collaboration between the Minister, the ministry and AQED has led to a better understanding on both sides of the issues affecting this dossier.

AQED was consulted early in this process of change to the law and was invited to participate in the Parliamentary Commission and the National Roundtable on homeschooling. During these months of discussions, real progress has been made. The most important : the recognition of the differences between public education and homeschooling.

It was then recognized that homeschooling families’ reality did not have to be constructed around the Quebec Education Program (QEP) as well as the Progression of Learning (POL). In this regard, the recognition that parents have the right to choose their educational approach was a great step forward. The government’s offer to provide support instead of coercion when difficulties arise was a relevant idea to ensure the adhesion of unregistered families to a flexible monitoring.

However, with the assent of Bill 144, Quebec became one of the Canadian provinces that has the most control over homeschooling families, even the ones who do not seek government services or funding. Ontario and British Columbia do not require any default follow-up for homeschooling families. Only cases that are reported are investigated by school authorities.

Several elements of the regulation adopted in June 2018, but mainly the 2019 new regulation, remain difficult for many families to accept.

Concerns of educator families during the 2018 regulation:

Additional concerns with the second regulation:

The Direction de l’enseignement à la maison (DEM) monitoring is a lot more strict and controlling. It shows a major step back regarding the understanding of homeschooling realities.

The DEM implementation of the regulation, their interpretation of it, seems even more rigid than what is actually written in said regulation, as it is now expected that families will follow the same progression than the Quebec Program, with precise mandatory contents.

Evolution of the legal framework

Before November 2017, Article 15.4 of the Quebec Education Act was the following:

“15. The following students are exempt from compulsory school attendance:

4°  a student who receives homeschooling and benefits from an educational experience which, according to an evaluation made by or for the school board, are equivalent to what is provided at school.”

In November of 2017, Article 15.4 of the Quebec Education Act became as follows:

“15. The following students are exempt from compulsory school attendance:

a)  a written notice to that effect is sent by his parents to the Minister and to the school board that has jurisdiction;

b)  a learning project to impart knowledge to the student, foster his social development and give him qualifications, by the development of basic skills, including literacy, numeracy and problem-solving skills, and by the learning of French, is submitted to the Minister and implemented by his parents;

c)  the Minister monitors the homeschooling; and

In June 2018, the Education Minister put in place these regulations: Proulx regulation (2018) .

Then, in July 2019, the new Education Minister published an amendment to that regulation: Roberge regulation (2019).

With three major changes in three years and an inadequate stiffening of the homeschooling reality, many families have lost faith and feel betrayed.

It is worth remembering that the absence of documentation is not the same as the absence of education. Moreover, the time parents have to spend on administrative tasks deprives children of valuable learning time with their parents.

Exams, especially in an alternative educational context, are condemned by many experts, like the Conseil supérieur de l’Éducation.
Homeschooling families in Quebec must be aware that what they agree or not to do when implementing the legal framework could have long-term repercussions on the face of home education in Quebec.

To learn more about this topic, see the Our Position page of our website.