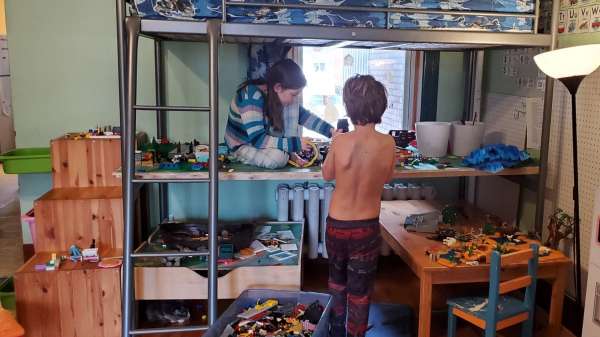 People often ask me, "How do you manage to homeschool five kids of different ages?“ (their expression and tone filled with concern and/or pity). Well... sometimes we manage... sometimes we don't!

I write more often about when we’re not managing. Our schedule in chaos, the bickering, the incessant demands, the mess, the sneaky urge to commit just a minor theft, hoping the judge will send us to jail for a 2-3 month vacation! Fed, housed, no need to think, no need to care about anything or anyone! The most relaxing vacation of my life... haha (half deranged/half desperate laugh)! It's easier to be funny in the midst of chaos! But I write less often when we are managing. Because by homeschooling, by having my kids with me most of the time, we get to experience the roughest patches while having the immense, immeasurable opportunity to enjoy the good parts!

You know, the sweet days... the days when I sit in the hallway to listen to my children play together in harmony, in flawless, foolproof, indestructible complicity! The days when I walk on tiptoe so as not to disturb the cloud of well-being that has settled over the house. The days when everyone has found a place in this space that we six human beings occupy constantly and far too often for the last few months! (I haven't forgotten Pol, it's just that there are normally six of us during the day, haha!)

There is the one who plays a board game with her stuffed animals and imaginary friends. Who comes to tell me from time to time... often... every single thought and action of her plushie...! But where I take the time to listen to her. I take the time to give her the attention she needs (which is a lot... a lot, a lot, haha!). There are those who play in a world of Legos. Surrounded by constructions, houses, buildings, ships, characters spawned from a bewildering imagination. "The sky is the limit"... is still too limiting for them. Their stories rival those of the world’s greatest science fiction authors!

And sometimes there is conflict. They don't get along. But the days we are managing, they can settle their disagreements amongst themselves by drawing on the many resources I try to give them. You know, the ones that you repeat on a constant loop, with the feeling that your words are a train and their ears a tunnel crossing their brain from one side to the other without any stops inside their head! Well, surprise! It turns out they are able to apply them!

There are those who take their bath for the third time in a day. Because here, bathtime is an activity like any other. Sometimes they can spend an hour, sometimes three minutes, sometimes one comes out and another one takes their place! Sometimes they play alone, sometimes four at a time! I often leave the water in all day. We add hot water from time to time! I basically have an indoor pool! A spa in my house!

It's not worth dragging them away from Legoland to learn addition and subtraction that they're going to learn about anyway when they have to build an underwater base for their characters... It's not worth pushing them to sit at the table to learn to read when they're going to be listening to audiobooks and reading their comics during the day. Since they're going to come to me saying, "Mom, look at Garfield talking to John! That's so funny!" proud of themselves because they were able to read on their own! Or “Mom can you pick up the sequel to my novel from the library? " It's not worth taking him out of the bath because as he watches the water run through his hands, he'll ask me, “Mom, what makes fireworks go off? " (yeah... I have one whose brain takes subtle paths I don’t always follow! Ha ha!) And so we'll put on the “C'est pas sorcier” explainer for him to learn about fireworks!

So, to those who wonder how I manage, I wouldn't know how to answer other than to say that sometimes we manage, sometimes we don't... But when we do, when I look up from my book, take a sip of coffee, look at the little society I've created, within which we’re all evolving, I know that the days we don't manage don’t matter, because it's worth it a thousand times over when we do!