I am an ordinary mom, navigating in the world of homeschooling for almost 19 years. This means that I have taken my children from preschool to CEGEP, through all the elementary and secondary school subjects. Which just goes to show that if I can do it, you can do it too. I enjoy leading many activities for our support group and I try to give a little of my time to AQED. Homeschooling is not part of my life, it IS my life.

You can follow me on my page: L’école de rang de Katherine. 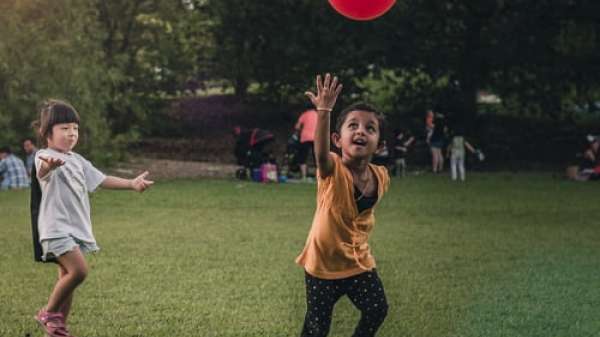 So let me address those people perpetuating this myth. Others can keep reading to make me happy, but I really want to focus on those who are hesitant due to fears around socialization.

Is it being around other children every day? Is it to have real friends? Is it to see people?

How does a traditional school achieve this better than a homeschooling environment?

Without speaking poorly of traditional schools (just because we homeschool doesn't mean that we are all against traditional schools), does sitting with 25 other children in a class and silently listening to an adult in a position of authority represent your idea of socialization? With only two 15-minute recesses during which the children need to go to the washroom, get dressed, play outside, undress and make it back to class?

You’ll probably argue that school is less like that. Nowadays, children are grouped in little islands of four desks; they work in teams; their seating arrangements are flexible, and they can communicate more with each other than in the “old days."

In that case, do you know any homeschooling environment that doesn’t operate like that?

My children work in groups all the time; the seating is very flexible (their bed, a sofa, the treehouse, the kitchen table, the floor in the playroom or the swing outside); they talk with each other during every meal and they come in contact with friends of all ages, backgrounds and academic levels on a regular basis.

Is that not convincing enough for you?

My schedule is more packed than a politician's! Here’s just a few examples of socialization in the past year.

Activities with our support group

The children discuss reasons for going to war. The party gets off to a good start with the reading of a children's book. They are between 8 and 15 years old. They have such different perceptions, they listen to each other, correct each other, argue... and grow together!

Outing to the museum

During a visit to the Pointe-à-Callière museum, my daughter makes her way to her friend whom she hasn’t seen in the last two weeks. They head off arm-in-arm to discover the Greek artefacts on display. They are part of a bigger homeschooling group consisting of children of all ages. Most are between 6 and 15, but there are also younger siblings gravitating around them. The tour guides are amazed by the group. The children are calm and curious, and they are constantly asking relevant questions. One can sense their respect for others and their interest in the exhibit.

Last year at the science fair, young presenters between the ages of 6 and 15 worked together or by themselves for a few months to build a presentation that they shared with at least a hundred people. Throughout the whole evening, they explain how they built their presentation and why they are passionate about this topic. They wrap up the evening with a movie and popcorn while the adults socialize over drinks.

At the Christmas market, the children sell their own crafts. They are basically entrepreneurs. The adults who come to purchase stocking stuffers and small gifts are usually impressed by their talents both as creators and as business people, not to mention their skill at haggling.

One homeschooling father is a chemist. He brings boxes of atomic models to a presentation during which he explains the ins-and-outs of basic chemistry. All the children are fascinated by his demonstration. While the 6-year-olds start building imaginary molecules, the 13 year-olds try to replicate actual molecules. Two weeks later, a homeschooling mother who was formerly an occupational therapist comes by to share her passion. She explains how to maintain a healthy back with diagrams, exercises and advice.

Every other week, the children in the writing club meet to write, tell stories and create posters. They will hold a book fair at the end of the project. They are between 6 and 14 years old. Their stories, all different and very entertaining, are written according to each child's ability. The children are very proud to share their stories with others.

Fifteen teenagers from grade 7 to 11 slumped in bean bags are discussing the novel they read during the last month. They share their thoughts on serious or light topics. Sometimes, they stray from the topic to throw in a joke or two, then they come back to the main character. Why did he leave? Was he in pain? Did he seek revenge? They each have their opinion and talk with respect.

Meanwhile, just a few steps away, a group of eight children, 4 to 8 years old, sit around a table, drawing, listening to stories and learning how to explain whether they liked them or not. They are learning to listen to the opinions of others.

Finally, not much further off, children aged between 8 and 11 are also discussing a novel they've read and doing activities around the theme of the novel such as games and challenges. They're engaged and participate with interest. They meet once a month in a public library (thus as part of a community).

I could go on and on, but sometimes it’s too much. We become tired of going out and meeting And I could go on like this for a while, sometimes for far too long. Because sometimes it's all just too much! We're tired of going out and seeing people... We need some peace and quiet, our routine, and some time in our family cocoon. We take a three-week break where we stay at home, bundled up under the blanket or taking advantage of the newly fallen snow to play outside, well past the time allotted to a school recess.

That too is part of the socialization process. Knowing how to take time for oneself, to turn inward and savour the life passing by. Who needs to always be with a group of 25 children?

But is it really? If so, why do you take two weeks of vacation a year to get away from work and your colleagues, and get away with your family? Between day camps and the school year, do kids at school ever have a break?

Hopefully, you’ll have realized that there are plenty of opportunities to see friends and to get out of the house, and that homeschool kids don't stay cooped up within four walls all day long. But there is more...

A broader definition of socialization

Socialization also means visiting grandmother at a senior’s home because she has stage 4 cancer. Today is a good day, she's clear headed and not in too much pain. That's when it's the best time to be there. Not tomorrow Saturday, because it may be too late. And when it's too late, we take the time to grieve with our family, we don't have to go back to work right away. A father has five days for the death of a parent while a child has to go back to school the next day. A dad can go to the funeral parlour, make arrangements and deal with all kinds of practical matters. He can take time to process, whereas if the child has an exam coming up, they can't miss it. They will have to rest the next day, after homework...

Being surrounded by friends all day but being unable to interact with them except during two short 15-minute recesses of which 5 minutes are spent in the washroom is not socialization. Socialization is about finding our own place in society and knowing how to behave with a variety of people (friends, colleagues, family, seniors, etc.) in a variety of circumstances (during a show, at the library, in public transit, at the supermarket, etc.)

In this sense, homeschooling is perfect for socializing. Does my child miss anything from school while being at home? Sure, they are missing lots of interesting stuff. Would my children miss something if they were always at school? Obviously. In 20 years, would they have been better off if I had chosen another schooling setting? Maybe, but it won’t be because homeschooling kept them secluded from society.

And if you're still not convinced,  maybe we should grab a drink and continue this conversation. I am unfortunately very sociable, I talk a lot, but I listen as much. I am interested in you, in her and in him. I went to school. This is my daughter: she is unfortunately very sociable, talks a lot, listens a lot and is interested in you, her and him. She has been homeschooled...for almost 12 years now.